Erling Haaland has been one of the hottest players in the soccer card hobby for the past year and a half. Haaland dominated the highest soccer card sales of 2021 list. With all the new collectors rushing in they naturally gravitated to his more flagship cards like Topps Finest (Search on eBay), Chrome Champions League, Bundesliga (Search on eBay) and Sapphire (Search on eBay) when looking to buy his rookie card. Finest was in his Salzburg kit and Chrome and Sapphire was in a BVB kit. His base cards skyrocketed about a year ago while the rush was on. Same happened with his Panini Fussball (Search on eBay) sticker which is in a Salzburg kit. Now they have fallen quite a bit as the PSA 10 pop counts from PSA have risen each month. His rarer parallels have held up pretty well and in some cases have gone up. That has been pretty standard across all sports in the hobby over the last year.

What you may not know is what his first two cards were. Most know the Fussball sticker came first but don’t know about two Topps on demand cards that came out about a week later on September 17, 2019. These two cards came out roughly 9 months before his Topps Finest did on June 20, 2020. As collectors seem to be focusing more on Haaland cards in a Salzburg kit these cards became quite interesting. Both were super low print run and there aren’t many PSA 10 of each. Of the 2 on demand cards, the Topps Now #11 (Search on eBay) card is more widely known as the popularity of Topps Now has grown significantly since the Haaland’s came out. Less collectors seem to know about the Match Attax #OD12 (Search on eBay). Let’s break them both down just to show you how rare they are. 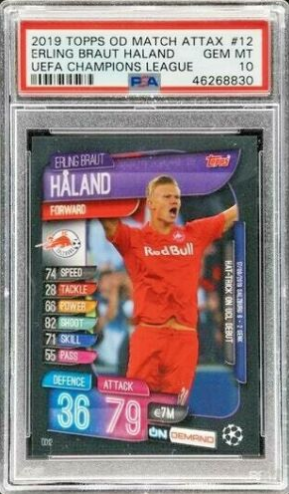 This is widely considered his first card as it was delivered by Topps to customers first. As mentioned above both cards were able to be ordered the same day so it is not a huge difference. For those that don’t know Topps Match Attax is the most widely printed soccer card in the world. It is part of a game that is played by kids. For those reasons Match Attax cards don’t usually carry a lot of value. As mentioned above rarity is key to the value of cards and most Match Attax cards are plentiful. The Haaland OD12 is different. The OD stands for on demand in case you are wondering. It came in a pack of 6 cards that was only sold on Topps UK directly like Topps Now card are. While we don’t know the exact print run we know that is was fairly small compared to cards that are released “normally” in the hobby. The boom had not hit yet and Haaland was not nearly as known as he is now. This card celebrates his UCL hat trick debut for Salzburg in a game which really put him on the map. Ansu Fati was also in this pack and at the time was probably the more sought after prospect.
Since we don’t know the print run exactly like we do with the Topps Now the pop reports will be our friend. With this card coming out when it did and since it was a Match Attax card most did not go to true collectors. Most were likely bought to play the game with. The has led to some real scarcity among graded cards and especially 10’s. As of the time of writing this there are only 9 PSA 10 (Pop Report). In fact there are only 24 copies graded total at PSA. There are 8 currently graded at SGC with 1-10, 3-9s, 2- 8.5s, 1-8, and 1-Authenticated. I could not find any graded by BGS but if someone finds that pop report let me know. The total number graded will go up as time goes on because of the PSA shutdown. We likely won’t have a good idea of around where the population of OD 12 ends for another 6 months. This will be something to really keep an eye on as it pertains to the value of the card especially the PSA 10s since these are very tough grades. 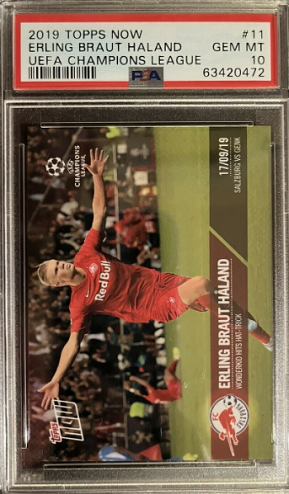 The Topps Now is definitely the more well known card of these 2 Erling Haaland rookie cards. Part of it’s appeal is that it is known to have a print run of 178. It is most likely the lower print run of these two on demand cards. These cards were sold on the Topps US site which means the people that were lucky enough to buy them were more likely collectors than with the Match Attax card. They were also kept in better shape for this reason. This is backed up by the pop reports of the Topps Now compared to the Match Attax. There are 35 PSA 10 and a total of 57 graded (Pop Report). Since these were bought by collectors there are also a good amount graded by BGS. There are a total of 45 BGS with 13 10s, 29 9.5s and even a black label (Pop Report). I could not find any graded by BGS but if someone finds that pop report let me know. As you can see the Topps Now grade much better than the Match Attax. If you are lucky enough to have bought these and find them they will likely be in the case that Topps sent you so get them in. The Match Attax cards buyers are likely not so lucky.

Value Of The Cards

So what does this all mean now and for the future? We know that right now the Topps Now sells for much more than the Match Attax.  With such low pops neither sell often but there was a listed sale of the Topps Now for $12500 back in February. There was a PSA 9 sold a few weeks later for $10000. These sales were best offer on Ebay and I have no idea if they are real. In my best guess the PSA 10 was real and the PSA 9 was not. The OD12 PSA 10 sells even less, there are only 9 of them after all, with the last sale I could find being $3200 for back in April 2021. A PSA 9 sold for $712 on March 3, 2022. At the time of writing there are 3 Match Attax for sale on Ebay and 6 Topps Now.

In my OPINION the Match Attax because I think they are currently undervalued. Nothing I ever write is meant to be investment advice. It is just meant to be informational, and you should do your own research and use your own judgement. Even if the pops were to quadruple from where there are now, they would be inline with the number of PSA 10 Topps Now and that doesn’t include all the Gem Mint+ BGS cards. The Topps Now is currently the more collectable card which is shown in the value but I am banking on the Match Attax gaining value as it gets more attention. The key will be in the Match Attax pop reports. For full disclosure I recently traded for a PSA 10 to put my money where my mouth is on this. If I mis estimated the rarity of the card of the amount of PSA 10 still out there ungraded then I may have made a bad trade. I just believe in Haaland and more specifically Haaland Salzburg cards.

*All Search on eBay links go to eBay.